By Madi May 28, 2006
Fifteen-year-old Zamira Dzhabrailova was named Beauty of Chechnya, and took home a foreign car and a cash prize. 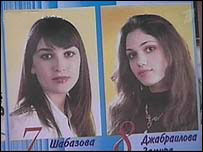 Saddam's novel to be published next week

By Madi June 27, 2005
AMMAN, Jordan: Saddam Hussein's family will publish next week a novel written by the ousted Iraqi leader before the US-led war on Iraq, his daughter said on Friday. "Ekhroj minha ya mal'un" whose title could be translated into "Get out, damned one" tells the story of a man called Ezekiel who plots to overthrow a town's sheik, but is defeated in his quest by the sheik's daughter and an Arab warrior. The story is apparently a metaphor for a Zionist-Christian plot against Arabs and Muslims. Ezekiel is meant to symbolize the Jews. Raghad Saddam Hussein said her father finished the novel on March 18, 2003 -- a day before the US-led war on Iraq began -- and had expressed a wish to publish the book under his name. The three other novels he wrote were simply signed "Its author." "It was my father's will to publish this book," Raghad said in a telephone interview. Read more An Iraqi artist designed the book's cover, she said, and a
Post a Comment
Read more